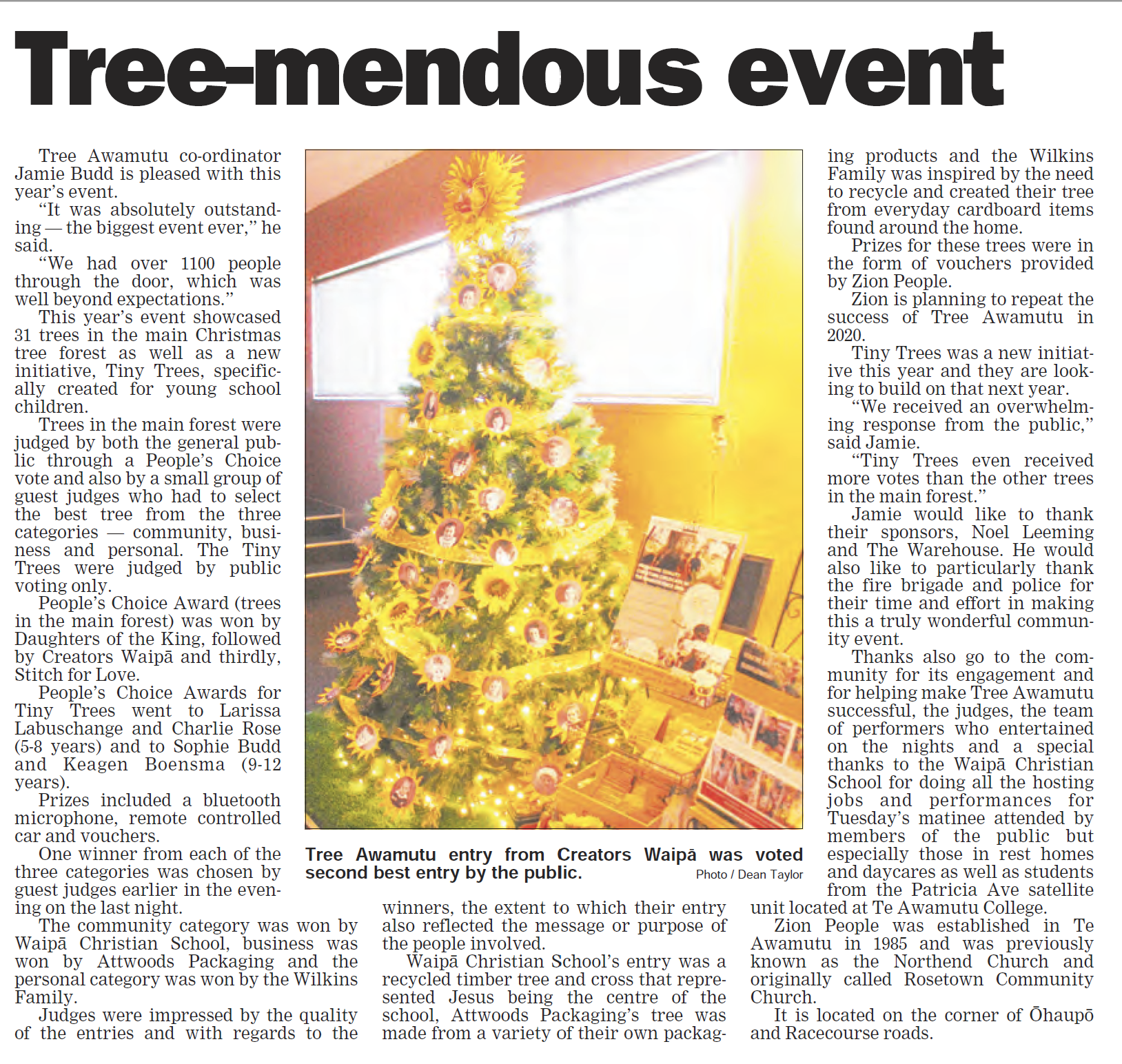 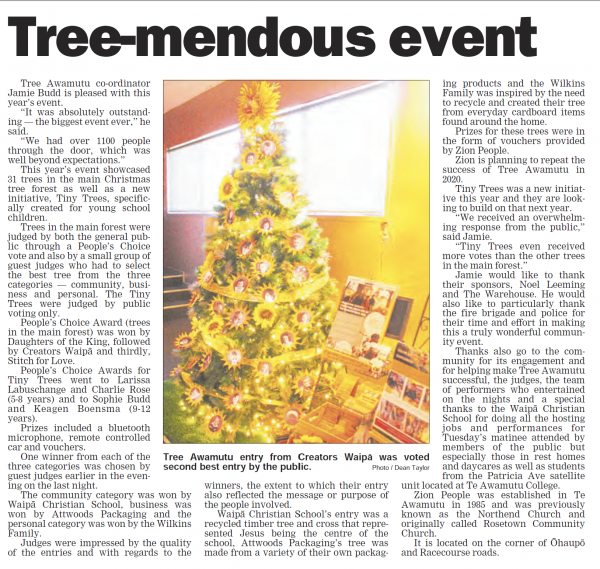 Tree Awamutu co-ordinator Jamie Budd is pleased with this year’s event. “It was absolutely outstanding— the biggest event ever,” he
said. “We had over 1100 people through the door, which was well beyond expectations.” This year’s event showcased 31 trees in the main Christmas tree forest as well as a new initiative, Tiny Trees, specifically created for young school children.

Trees in the main forest were judged by both the general public through a People’s Choice vote and also by a small group of guest judges who had to select the best tree from the three categories — community, business and personal. The Tiny Trees were judged by public voting only. People’s Choice Award (trees in the main forest) was won by Daughters of the King, followed by Creators Waipa¯ and thirdly, Stitch for Love. People’s Choice Awards for Tiny Trees went to Larissa Labuschange and Charlie Rose (5-8 years) and to Sophie Budd and Keagen Boensma (9-12 years).

Prizes included a bluetooth microphone, remote controlled car and vouchers. One winner from each of the three categories was chosen by guest judges earlier in the evening on the last night.

Judges were impressed by the quality of the entries and with regards to the winners, the extent to which their entry also reflected the message or purpose of the people involved.

Waipa Christian School’s entry was a recycled timber tree and cross that represented Jesus being the centre of the school, Attwoods Packaging’s tree was made from a variety of their own packaging products and the Wilkins Family was inspired by the need to recycle and created their tree from everyday cardboard items found around the home.

Prizes for these trees were in the form of vouchers provided by Zion People. Zion is planning to repeat the success of Tree Awamutu in 2020.
Tiny Trees was a new initiative this year and they are looking to build on that next year. “We received an overwhelming response from the public,” said Jamie.

“Tiny Trees even received more votes than the other trees in the main forest.”  Jamie would like to thank their sponsors, Noel Leeming and The Warehouse. He would also like to particularly thank the fire brigade and police for their time and effort in making this a truly wonderful community event.

Thanks also go to the community for its engagement and for helping make Tree Awamutu successful, the judges, the team of performers who entertained on the nights and a special thanks to the Waipa¯ Christian School for doing all the hosting jobs and performances for Tuesday’s matinee attended by members of the public but especially those in rest homes and daycares as well as students from the Patricia Ave  satellite unit located at Te Awamutu College. Zion People was established in Te Awamutu in 1985 and was previously known as the Northend Church and originally called Rosetown Community Church. It is located on the corner of Ohaupo and Racecourse roads.